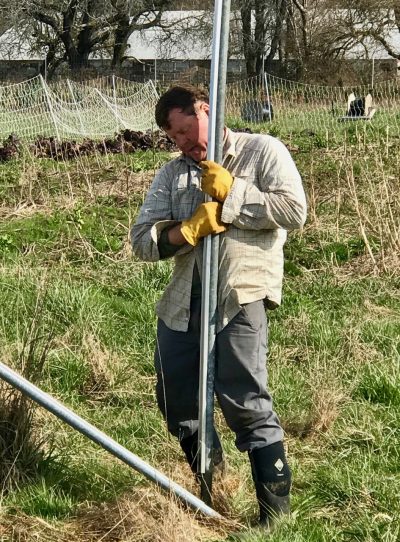 The construction of our own building on this cooperative farm has sucked up a lot of our time and energy. I've declined several invitations from LB and Andrea for weekend gatherings because we've been out there on weekdays and have wanted the rest of spending the weekends in Seattle. Weird to say that, but right now, with the cold and rain, it is a relief to retreat to our comfortable condo in the city. Last week, we had to be there for several drippy, dreary days and knew we'd have to be back on Monday for a framing walk-through with our builder. So at first we rejected the call to all owners from Paul and Andrea for a Saturday work party to clean up the high tunnels destroyed two winters ago by a snow event. That twisted metal mess has been sitting there in the fields like tornado wreckage, ugly and dispiriting, a constant reminder of failure. I have hated to see it every time I've worked there and wondered when in the hell "someone" was going to clean that shit up. So as we thought about heading back to Seattle, both Phil and I had the same thought; that we should be at that "party." And not only that we should be, but that we wanted to be.