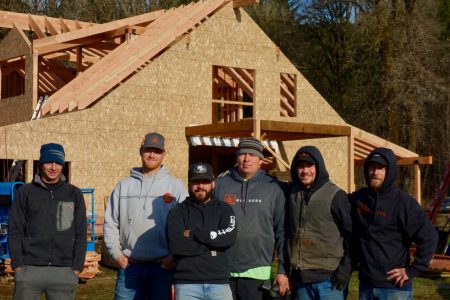 I've been amused by the crew working on the framing of our retreat. They seem completely competent ("lots of measurements being yelled out," I texted to Phil while he was in Israel, conveying my opinion that precise numbers were probably a good thing to get right in construction). But the more interesting thing has been the personal banter between them. Like the day they were giving one of their guys a hard time about receiving a cupcake and a Starbucks coffee from his girlfriend, not about the gesture itself, but about how TOTALLY EXCITED he was about it. The company we hired to do this work--the designer of this building--is Oregon-based, so these guys stay in a motel in nearby Shelton, Washington during the week while they work on our project, and I've overheard more than a couple of interesting conversations about the night before. As Daniel, one of the lead guys, was telling me how challenging it is to be staying in a place without a kitchen, I suddenly wanted to cook them all a big pot of chili. And all of this together, the camaraderie, the humor, the colorful language, the wish for something other than Doritos and beef jerky for dinner...it hit me that they remind me of the very best of the guys I used to cook for at a fraternity at UW. Or as I put it on social media: "This crew reminds me of the fraternity I used to cook for, minus the lazy jerks."