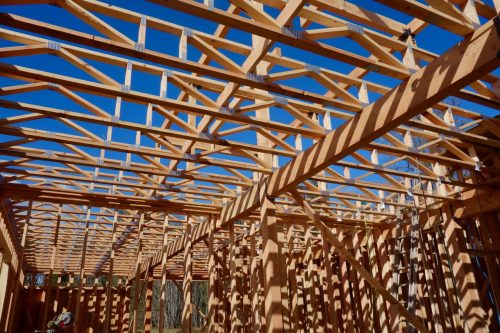 A week ago yesterday, there was only a slab. On Monday, I managed to capture this photo looking up to the second story and the sky just before they laid the floorboards. It was the first time Phil saw the building, having been abroad during the first week, and the engineer in him was impressed by the materials and quality of the construction. We've built other houses, but none has felt as solid as this. When we arrived, the power company had managed to resolve whatever issue they had with turning our power on, so one drama over. Another to come, when one of the workers drove heavy machinery over the septic drain field where you are absolutely not permitted to drive, resulting in potentially expensive damage. "I know you're upset," I told Phil later over fresh guacamole and a stiff drink. "But, it's done and we'll just have to deal with it." When we got back to Seattle, I ran into a neighbor we have had for years in our condo building, looking at me stricken. "I need to let you know that Rayne passed." His wife of many years, constantly by his side, just gone without warning. I was quiet over dinner, thinking about how things are fixable, replaceable.