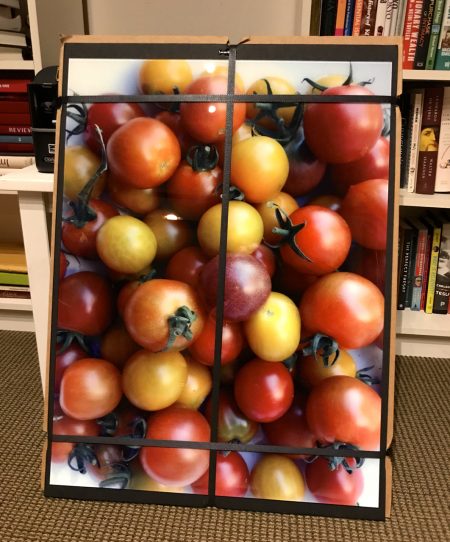 I can't remember when I ordered this giant printed-on-glass blowup of the first cherry tomatoes I harvested on the farm; it was several years ago when we thought we'd have a building up within a few months and I planned to hang it in the commercial kitchen. (And just so you know, I am not paid to promote anyone on this blog, but I ordered it from Fracture). It has remained in our Seattle condo, still strapped to cardboard, waiting; but with building set to begin in three days, I pulled it out to check it against paint swatches, a task that had seemed wildly premature until now. I was talking to Andrea yesterday about some new owners who cancelled their apartment lease thinking they would be able to move to the farm by April. Of this year. I looked at Andrea, mouth agape, and did not need to say it: They have no idea. She and Paul tried to gently educate them about it all: the permits and inspections and well-digging and power hook-up, the fruitless web searches and phone calls and gathering of quotes...literally years before you can even think about building a place to live in. But honestly, if we had known the struggle, I'm not sure we would have done it, so there's that.