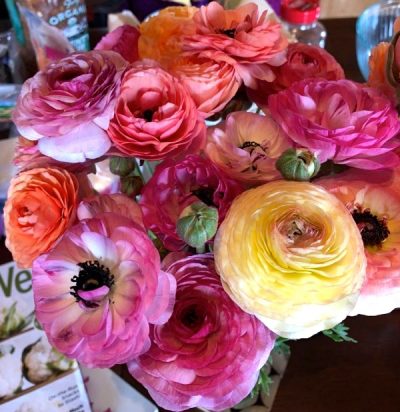 I asked Andrea if she's growing Ranunculus on the farm and she sent me this photo; it's a very large property and she adopted a high tunnel in the romantically named Island Field, away from the main vegetable and chicken operation, so I just hadn't seen her progress since she went all in on this as a business. In the previous years, she planted a smaller variety of blooms in amongst the crops where they attracted the much-needed pollinating bees and provided us with occasional summer bouquets. When she asked Paul if she could take over an entire high tunnel for flowers, he told her (and I'm not sure how much he meant it as a joke) that they had to earn money.  There is something about this flower with it's jaunty stems and delicate petals that brings me joy, despite it's odd name which, she tells me is Latin for Little Frog. The connection eludes me, but it does not surprise me that the most intellectually curious person I have ever known would look that up.