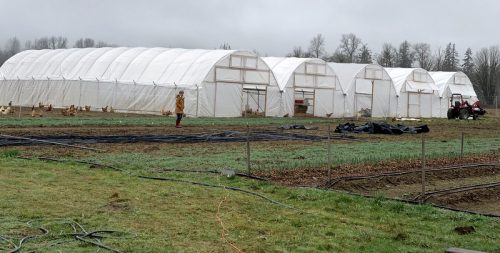 Our co-owner Paul, who acts as de facto farm manager, spent weeks putting up these high tunnels late last summer and we hadn't seen the completed work until January, when we were out there for a board meeting. We were back a couple of weeks ago and I could not bare to take a photo; I could hardly look at the destruction the recent days-long "snow event" had wrought.  All of this was flattened, all of the plastic ripped apart and the metal supports twisted, making them unsalvageable. Heartbreaking. The only bright note was that mirroring these four are four more that Paul had erected, but had not had time to cover with plastic, so they were unaffected. We walked around in disbelief at the damage simple snowflakes can do when they multiply. Andrea had told me this had happened a couple of weeks before I saw it for myself. She said Paul had called her from the fields to tell her and she had thought he meant there was some failure, but he said "no, it's gone." She and their four kids and some of our other co-owners who live on the farm had rushed down to gather the escaped chickens and put them in some unaffected shelter. It was exhausting madness, chasing the birds in deep snow, and when they got home, she had everyone strip off their mud and bird-shit covered clothes to be washed. And then the power went out. For two days. The farm is remote and the "primitive" road to it was impassible, and they all just had to cope together as neighbors. Mindful of our own imminent construction of a Barn Home, we talked about the lessons to be learned; how someone needs to have vehicle chains and clear the road as best we can until the snowplows get to us; how we all need generators and well-stocked pantries; how we need a defibrillator and first aid kits. And plenty of wine.