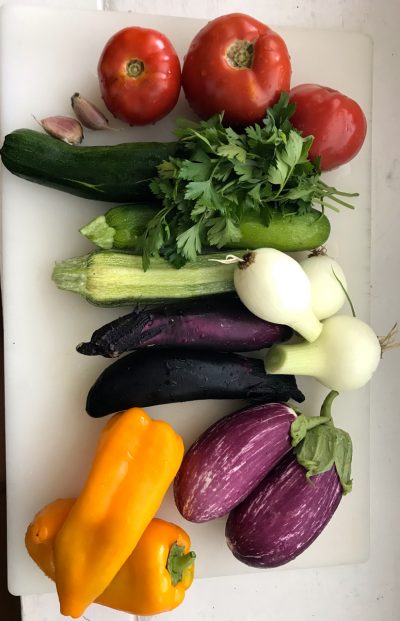 Earlier this week, Paul and I were texting about a customer's request to supply a wedding on short notice. As we discussed what was available on the farm in the next few days, I suggested that we had the ingredients for ratatouille if they wanted to make a bruschetta with that. Paul is an excellent farm manager, but he is not a cook and after several back-and-forth texts about what exactly ratatouille is and how to make it, I suddenly recalled a more amusing conversation on this topic a few years ago with Alex Badley, one of the fraternity guys I used to cook for. When I got back to Seattle, I pulled the book I had written about my years at Alpha Sigma Phi and found the passage. It was two years after he graduated and moved out that I received an email from him asking for my best ratatouille recipe, as if I had several in my arsenal. "It's vegetarian, right?" he added, tipping me off that this was for Monica, the same girl he'd been trying to impress with his nonbacon Bacon Peanut Butter Cookies at his internship just out of school. "I need it by 1:45 your time," he concluded, giving me the three busiest hours during my day to respond. And rather than send a rigid recipe, I sent him the basic concept, which I thought was simple enough and allowed flexibility in ingredients. What I got back was the following: "I have a few questions regarding your recipe. Please see them below." Eggplant (How many?) Zucchini (How many?) Yellow Squash (How many?) Red bell pepper (How many?) Olive oil (How much?) Preheat oven to 400 degrees. (do I preheat before I start cutting veggies?) Cut these vegetables into chunks and toss in olive oil (How much oil? Do I toss it in a bowl or in a frying pan/iron skillet on the stove?) Season with a little salt and pepper (How much?) Roast for around 15 minutes or until tender and slightly browned (What kinds of pans will I need for this?) The eggplant will probably take longer; make sure it's all the way cooked through and tender. (How can I tell when eggplant is cooked all the way through? What does it look like? So I do these on separate pans? See previous pan question).  Onion, chopped (one onion?) Garlic, minced (how much garlic? A whole garlic or a clove? What is the difference between minced and chopped?) Olive oil, Tomatoes, chopped. Use canned tomatoes in winter. (How many cans?) Fresh basil (how much?) Saute onion and garlic in olive oil until softened and fragrant. (In a frying pan?) Stir in tomatoes and cook until thickened. Toss in roasted vegetables. Sprinkle with basil. (I have attached two pictures of ratatouille to this email. Please tell me which one your recipe looks like.) "Jesus, look at this," I said to Blair as I finished reading and turned my computer his way. I had other things to do, like my job, but I took a few minutes to respond: This is not supposed to be complicated. You can use one or 1,000 of the vegetables. How much onion and garlic depends on how much other stuff you have. Let's just say you're doing 1/2 an eggplant and one small of the other vegetables...then about 1/2 an onion and one or two garlic cloves and a small can of tomatoes should work. Enough oil to lightly coat everything...err on the side of more, it's a south of France dish, it's supposed to be olive oily. Taste the eggplant; it should be tender and luscious, not firm. The eggplant should be lightly golden brown. Use cookie sheets for the roasted veg, a frying pan to saute the onion and garlic, one large enough to hold all the vegetables. You can serve hot or room temperature. You should use your common sense or look at a French cookbook for exact measurements...THIS IS A VERY SIMPLE RECIPE. And he replied: As you know, there has been no indication throughout my life that I possess common sense in regard to cooking. Do I need to buy a casserole dish to serve this in? By now, I was reaching the edge: Badley, you can just serve it on plates, you really cannot screw this up. He texted me a picture of his efforts the next day, an array of appetizing color in a white casserole dish. And then he explained the urgency of the recipe: The reason I had to make Monica dinner was because Nick and Jesse came to DC for the last two weeks and we acted like it was Greek Week. She was not pleased, so I made this meal to make up for it. It would have been so much simpler if I'd sent him Julia Child's perfect Ratatouille recipe. Simpler, but then I would not have had the story.