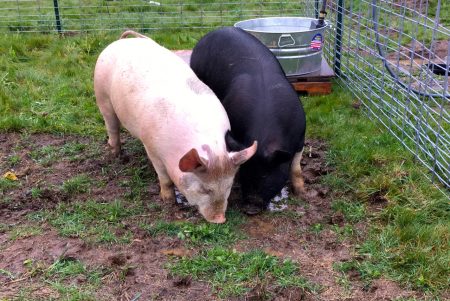 "Do they have names?" Phil asked Paul when he arrived at the Farm to see the new residents. They do, and Paul recited them, but I deliberately didn't remember. I do believe that if you're going to eat meat, you should be fully aware of the whole process, but I still don't want to know my pork chop's name. Still, it's hard not to find them adorable when you walk up to the fence and they trot over to you expecting you have something nice for them. For most of my life, pork was the last thing I wanted to eat, until I learned that pasture-raised pigs produce meat that is nothing like the pale, tasteless roasts at the grocery store. And that's beside the point that industrial pigs are raised in crowded, filthy and inhumane conditions. So with our large farm of plentiful grass, pigs have long been on the top of my list, well ahead of cattle, which I'd be happy without. As the three of us watched them grazing, we discussed slaughter which we hope to do on the Farm; it's less stressful for them than transportation to a processing facility. 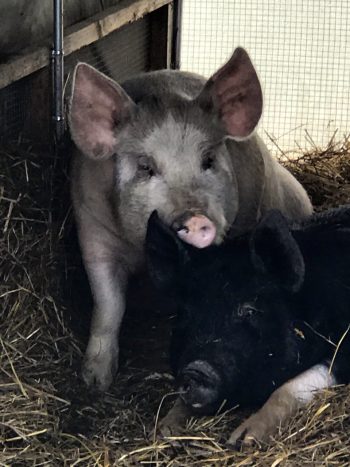 In my home state of Louisiana, there's a rural tradition surrounding this, the Boucherie, a celebration involving cooking the whole animal over open fire while live music plays and participants dance and drink. It sounds odd as I write that, positively primitive, but it comes from a time of need. My grandmother, born in 1910, described this to my brother in an interview where she discussed the food traditions of her childhood community. They were poor families and grew and raised their own food and when someone had a pig that needed to be slaughtered, they would gather to share in the work and in the resulting meat to be cooked or preserved. They wasted nothing and appreciated everything, exactly the kind of life we're trying to create here.